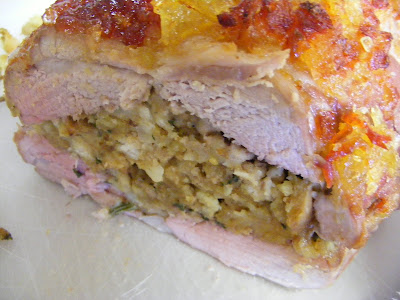 I almost always make a ham for Easter, however since we had ham earlier in the week, I decided to make something different and lighter yesterday.  I tell you this was the easiest Easter dinner I have ever made but still very tasty.

It turned out that the tenderloin I had bought, that I thought was one piece, was actually two pieces.  So I decided to fillet both pieces.  I placed one piece on a grill rack in a baking dish.  I sprayed the rack first with a butter flavored non stick spray.  I topped the tenderloin with my prepared stuffing. Note, I even skipped the butter in the stuffing but you could always add it.  Then I placed the other tenderloin on top and used toothpicks to keep the edges together and stuffing in.  I then topped it with pineapple topping, a little brown sugar, and a little chili garlic sauce.  Baked in the center of my oven, uncovered, at 325 F degrees until an internal temperature of 160 F was reached. 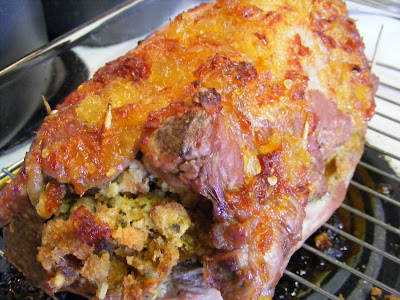 Remove toothpicks before serving.  You will want to let the meat rest
for 10 to 15 minutes before slicing.
This was a tasty main course that would be great with a number of sides.  I served slightly sweet Pan de Leche rolls, corn on the cob, and white shells and cheddar (my sons favorite) on the side.  Hope your Easter meal was delightful too.  The best part was having all of my boys around me at the table.

This recipe is linked up @
http://momscrazycooking.blogspot.com/2011/04/this-weeks-cravings-linky-party-26.html

Join the party!
Posted by Mindie Hilton at 7:06 AM