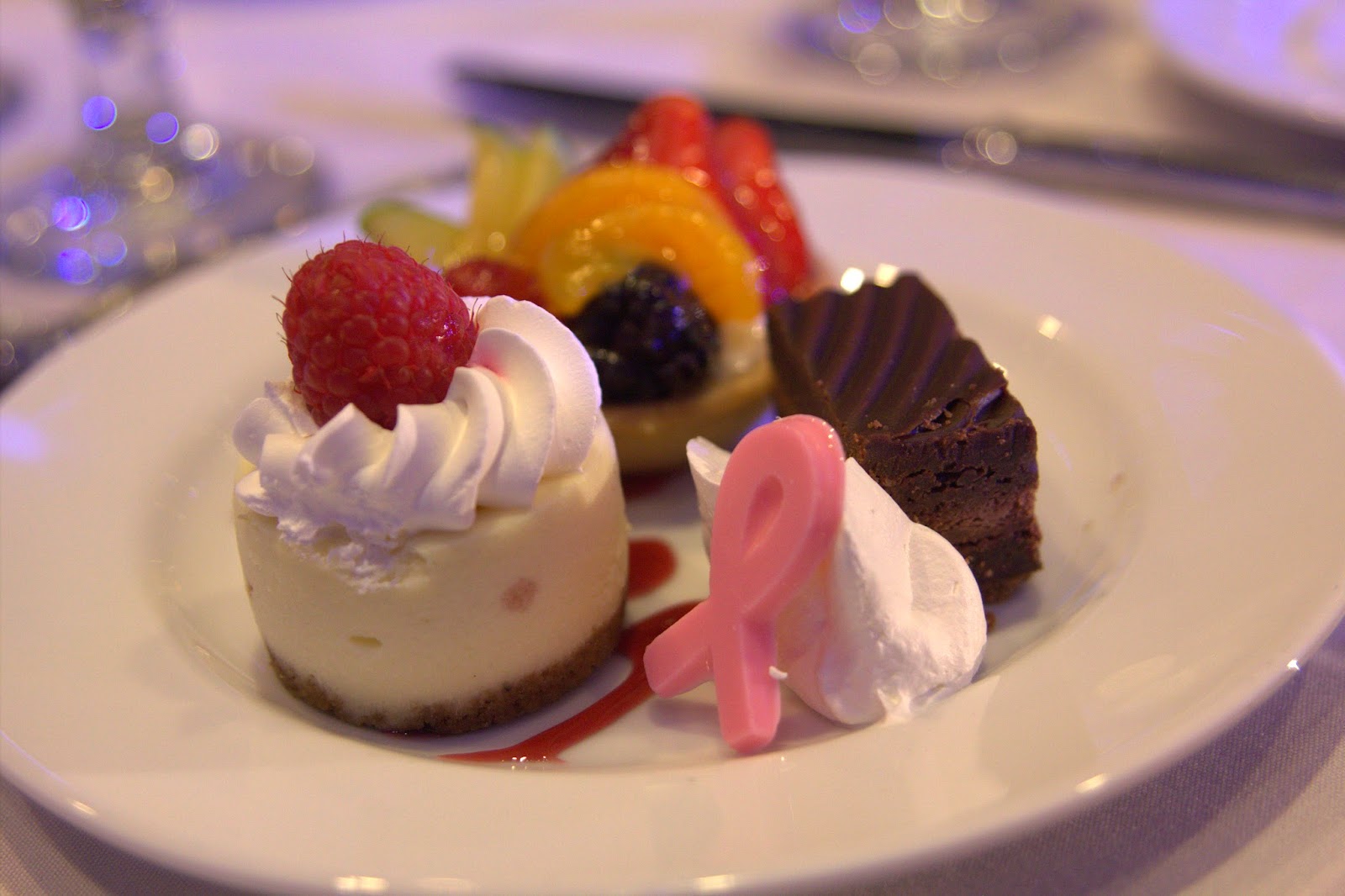 I know what you are thinking, that's a long title, and yes it's been a long 5 weeks. When your breast cancer is caught early, you feel fortunate. There is one drawback, you become faced with a huge decision to make. Mind you I have already had several lumps removed, leaving me feeling less than perky. Now I need to choose, do I have a mastectomy, do I have a mastectomy and reconstruction, or do I fight the cancer with radiation and drugs. I am meeting with my highly skilled team of doctors, and each one has a slightly different opinion, but all agree there is no right or wrong answer. There are pros and cons for each decision. I told myself I would not make a decision until I received my BRCA 1 and BRCA 2  test results back. Little did I know my blood would be particularly stubborn, and results would need to be re-ran, and take almost 4 weeks to return. During that time I thought long and hard at what I wanted to do, and changed my mind time and time again.  After 4 doctor appointments in two days, and two trips out of state, I have made my decision. I hope that I made the right one for me, but I truly won't know for sure until the future unfolds.


Keep in mind I am not a doctor, in college I was a Liberal Studies major, with a concentration in art, and only completed the mandatory science and health courses required for my degree. I am no cancer expert, that's for sure.  My continued education in the sciences entails The Big Bang Theory, and what my cancer team tells me. The following scientific information is my interpretation of the facts I have been given, I apologize if anything is incorrect. After meeting with a genetic counselor, with her recommendation, I had 6 genes tested for mutations associated with increased cancer risks, the most popular BRCA1, BRCA2,  as well as TP53, PTEN, CDH1, and STK11.  There are actually 12 other genes associated with increased cancer risk that I chose to waive tests on at first. Part of me wanted to know an answer for each one, the other part of me considered that many of these tests are fairly new science, and don't come with a definitive answer as to your increased risk. They also informed me the more tests, the longer wait period for results, possibly 8 to 10 weeks if I chose to run all the tests. Since I was already falling behind on my recommended deadline to start radiation 4-6 weeks from my lumpectomy surgery, it made sense to start with the top 6 genes, and most well studied. Apparently one of the genes my counselor was most concerned about was the TP53, it's not always a strictly inherited gene, and if you have it, your cancer most likely will get worse with radiation, not better, another good reason to test for it, prior to starting treatment.  I left the consultation knowing I had approximately a 29% chance of carrying a BRAC mutation based on her evaluation of my family history. After 3 1/2 long weeks of waiting, that I swear felt like 3 months, my genetic test results are in. All six gene's tested came back negative for a mutation! Fantastic news for me, as well as my boys. Since they came back negative, I am now choosing to run the other 12 gene tests. Since male breast cancer is in my family history, and I have two boys, I want to make sure there isn't a mutation I could have passed on to them. Good news no known mutations yet, bad news we still have no idea why I am dealing with breast cancer at the age of 36. We do know my cancer was fueled by progesterone and estrogen. In the end, that might have been the only cause. In about 10 weeks I will hopefully know more.

Just like my boobs without the support of a push up bra, I flipped and flopped back and forth with my decision.  My breasts are very lumpy, and will most likely cause me decades of stress, and repeated mammograms, and biopsies. A mastectomy would reduce many worries however it's not a 100% guarantee. Since they always leave a small amount of breast tissue behind, would I worry that mine are growing cancer under my implants or flap if I went the route of using my own natural tissue to reconstruct.  Would I be one of the few women that report ongoing pain and muscle spasms after reconstruction. Would I be happy with the results after what would most likely take 3 or more surgeries to complete? If I chose radiation, I would be traveling out of state for 5 to 7 weeks, 5 days a week, we don't have the technology in our small town. I will most likely be run down, have a painful rash, and be left with one breast firmer and much darker in color. I will then need to take Tamoxifen for 7 years, which comes with many common and not so common side effects. I am told it's a given, I will get hot flashes, possible weight gain, and run a smaller risk of severe side effects, including secondary cancers, in different parts of my body. As you can see this is not a simple choice to make, for every pro, there is a con. What would you do, if you were in my shoes, or have you been there and done that? I finally made my decision yesterday. I start radiation 5 days a week out of state, in Reno, Nevada next Tuesday, and will start taking Tamoxifen my last week of radiation. I will commute the first two weeks of radiation until my oldest son is out of junior high for Summer, and then my children and I will stay in a hotel the remainder of my treatment. Neither of us like to commute. At least they will get lots of pool time in, and if I am feeling run down, I can call for the maid to freshen our room. Since cancer patients receive a substantial discount at many hotels during treatment, I will actually spend less money lodging compared to commuting. My husband will stay behind to work overtime.  If all runs as planned, we will be reunited in July, and hopefully get some sailing in on our old boat as a family. I will be posting as usual at Bacon Time, just from a different location.

As promised, I have lots of great pics to share from the recent fundraiser I attended. On May 4th, I went to my first Runway For Life fashion show, silent auction, and luncheon! The proceeds go to women in Reno, Nevada with Breast and Gynecological Cancers. Although I live in Northern California, we consider Reno our neighbors. It's actually where my surgeon, medical oncologist, radiation oncologist, and genetic counselor are located. We don't have a cancer center or the specialists needed in our small town.  When they brought out my dessert plate, after already enjoying a delicious salad, and stuffed chicken dinner, I thought for sure I couldn't eat the entire thing, I was wrong. I ate almost all of it. After 4 weeks on my breast cancer diet, avoiding all sweets, and eating foods full of omega 3, folate, and fiber, a splurge was enjoyed.  Of course my normal self guilt stepped in, and I later punished myself with no dinner, and increased resistance on the elliptical. To be honest, I was still full from lunch, so I didn't really miss dinner, but the elliptical is relentless. It's my hour of self torture improvement I set aside for myself each day. I ride it, and listen to my favorite play list, as I envision myself getting stronger, and kicking cancers ass. 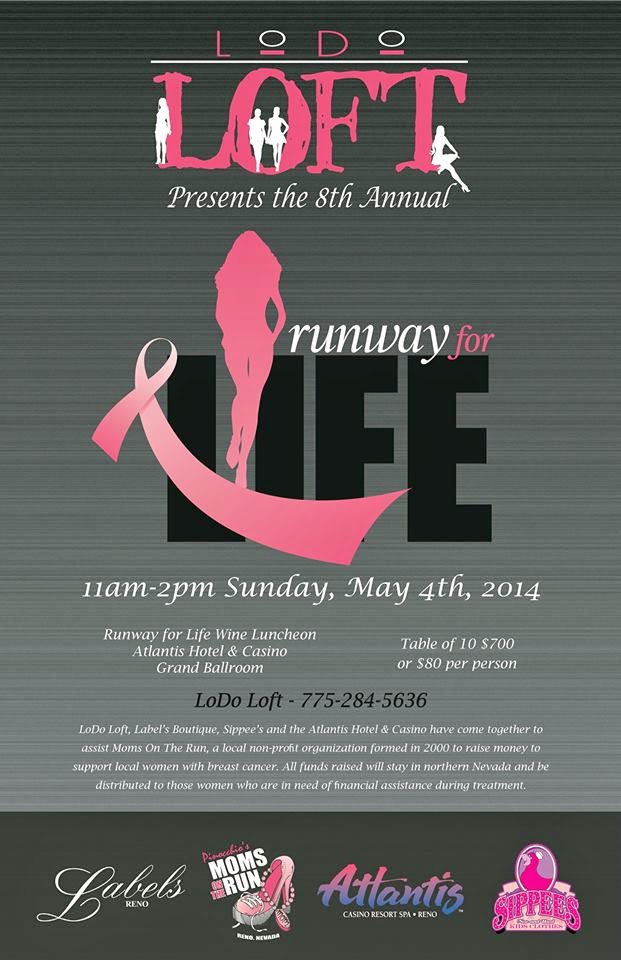 It was an incredible afternoon, with yummy food, and many amazing women, both those that host the event, and those that attend. There are many beautiful models for the fashion show, including 30 or more who are cancer survivors. It's a time for them to strut their stuff, and feel beautiful, regardless of the changes cancer and chemo may have had on them. I attended the event with my husband. I thought I might be the one to get chocked up, but I do believe I saw some tears in my strong mans eyes. It's so touching seeing the energy and emotion in these survivors eyes as they walk the runway. They have been through so much, their strength is truly inspiring. 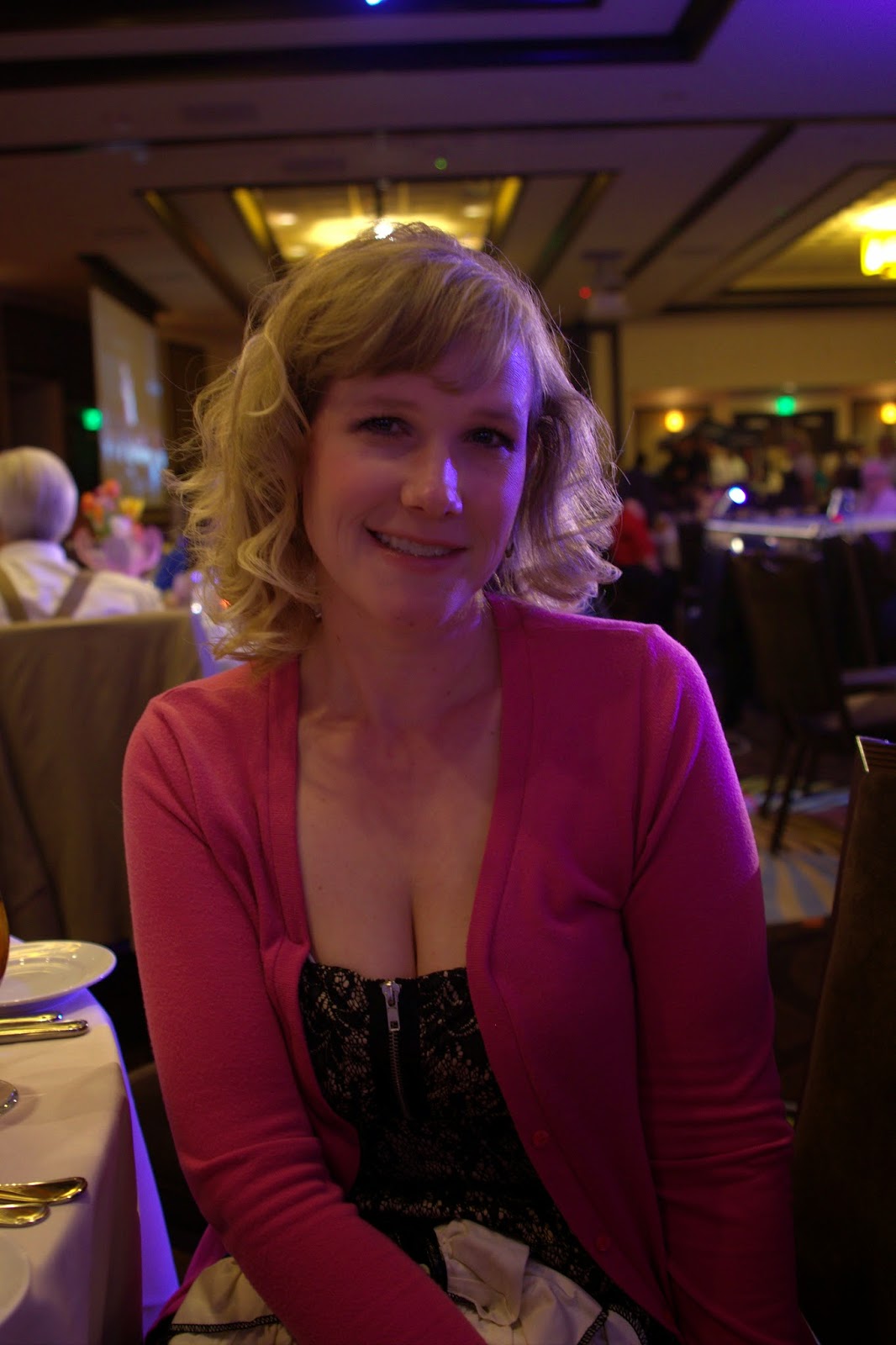 My husband loves this little black dress on me, and in this picture I see why, oh my. I have been asked to return next year, and model as a survivor! I already consider myself a survivor, because I have no doubt I will kick cancers butt. My journey is just starting with breast cancer, but I look forward to holding the title of survivor, and joining these amazing women next year on the runway, just don't put me in stilettos. 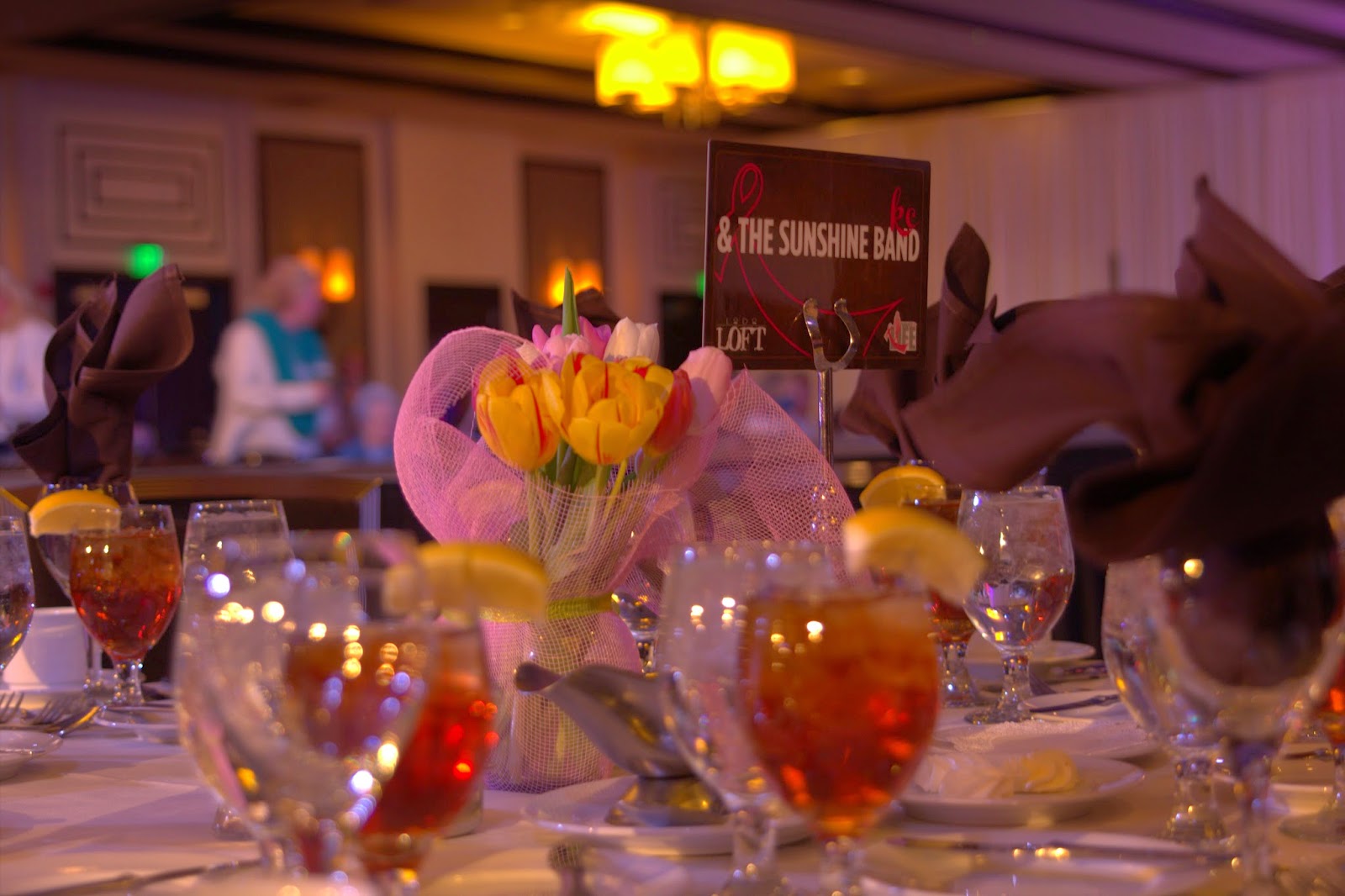 Every table in the huge banquet hall was decorated with gorgeous pastel tulips. 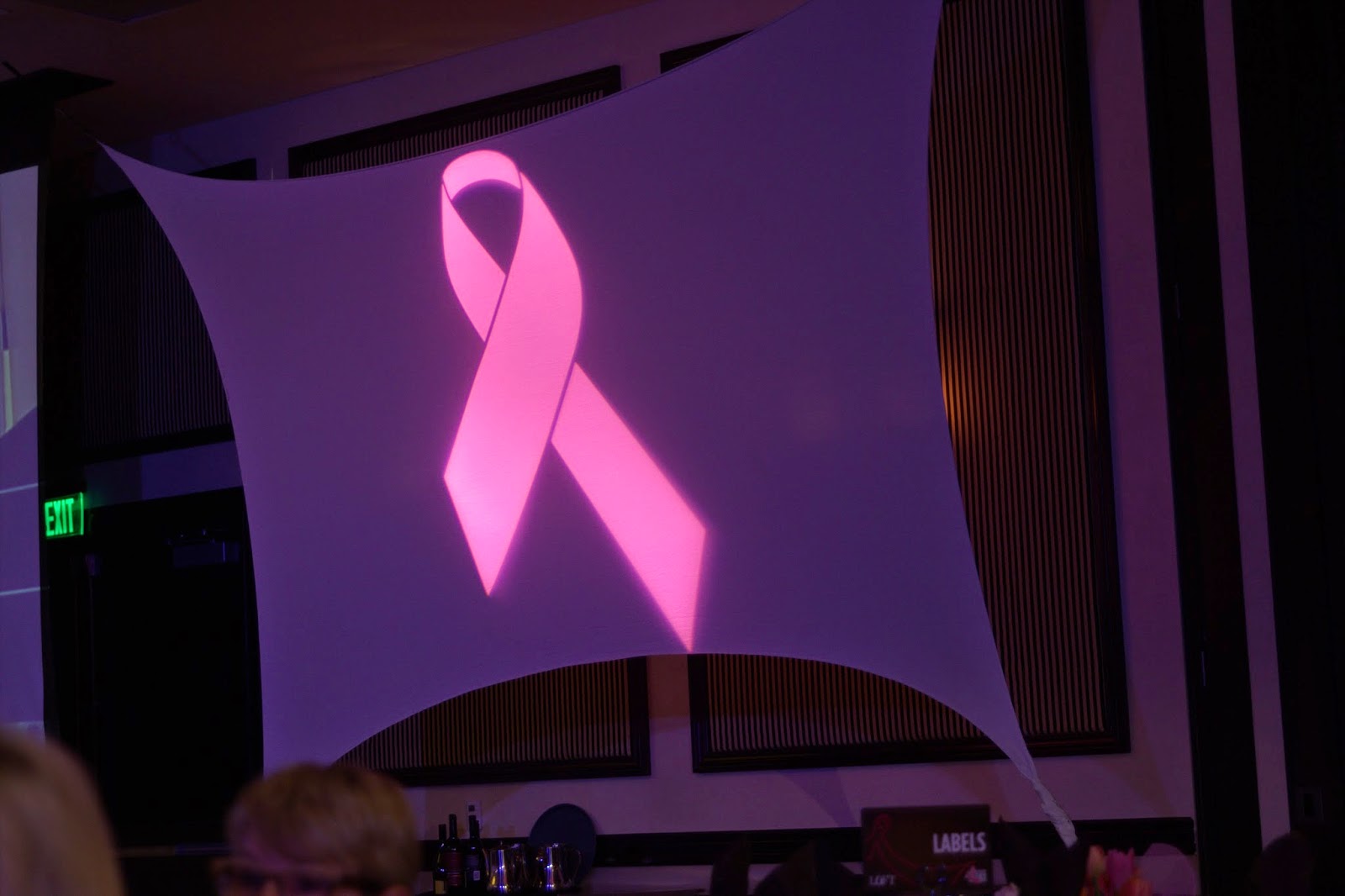 If you live near Reno Nevada, please plan to attend next years event. You will get to see me attempt to walk with grace. 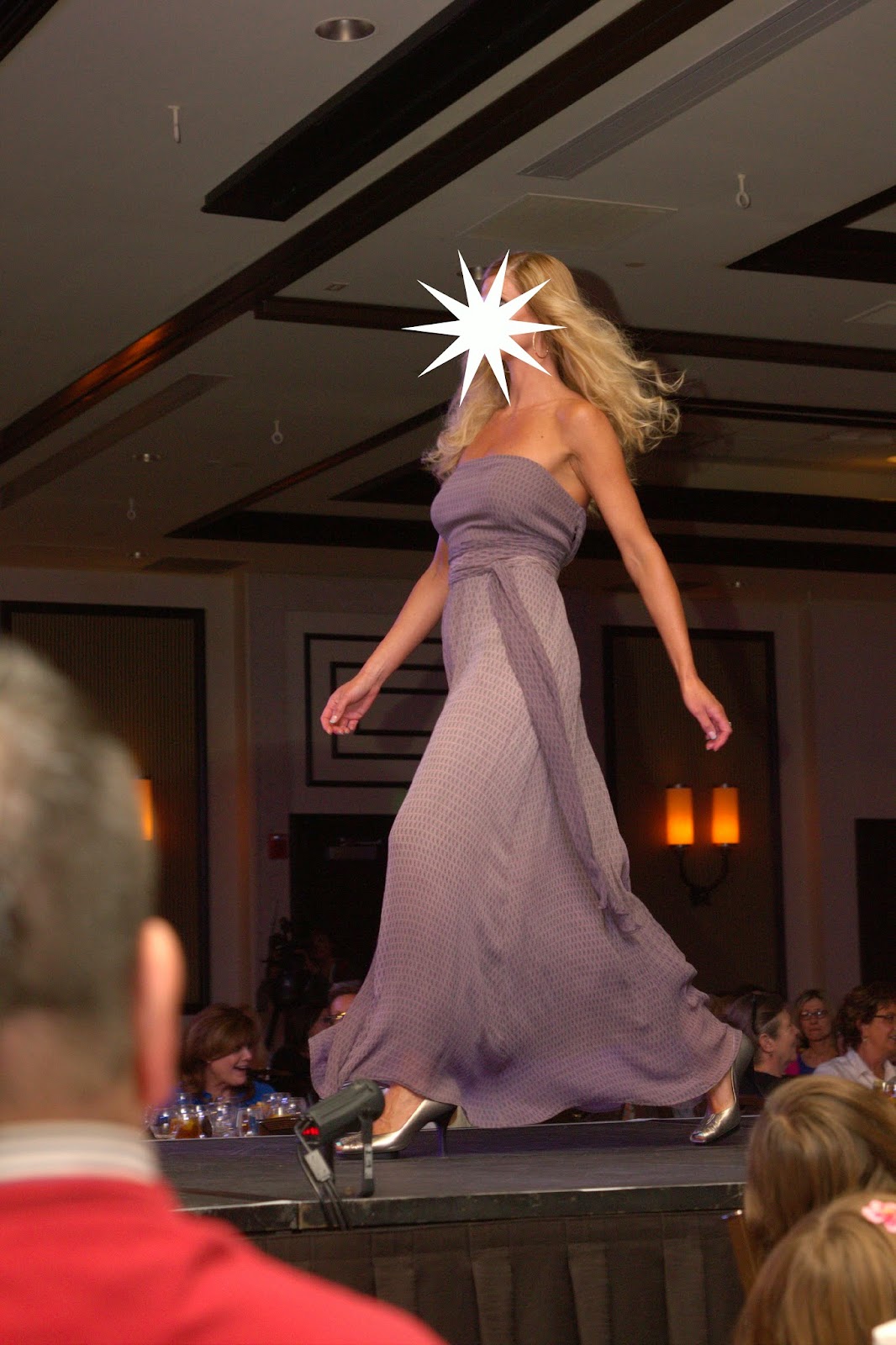 Here are a few of my favorite looks modeled at the event. Since I did not have the opportunity to ask each model if they would allow me to share their pics, I am hiding their faces to protect their privacy. 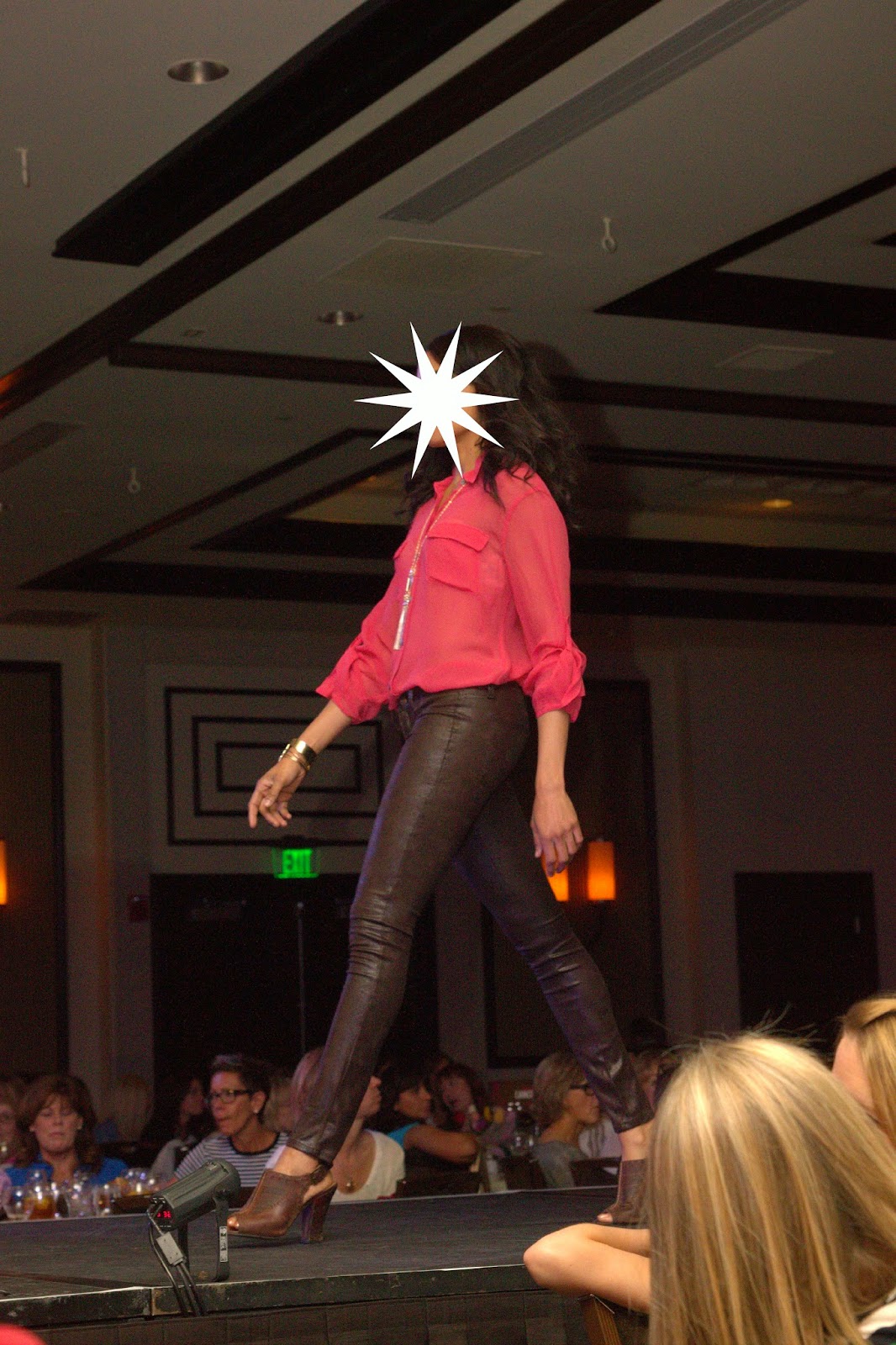 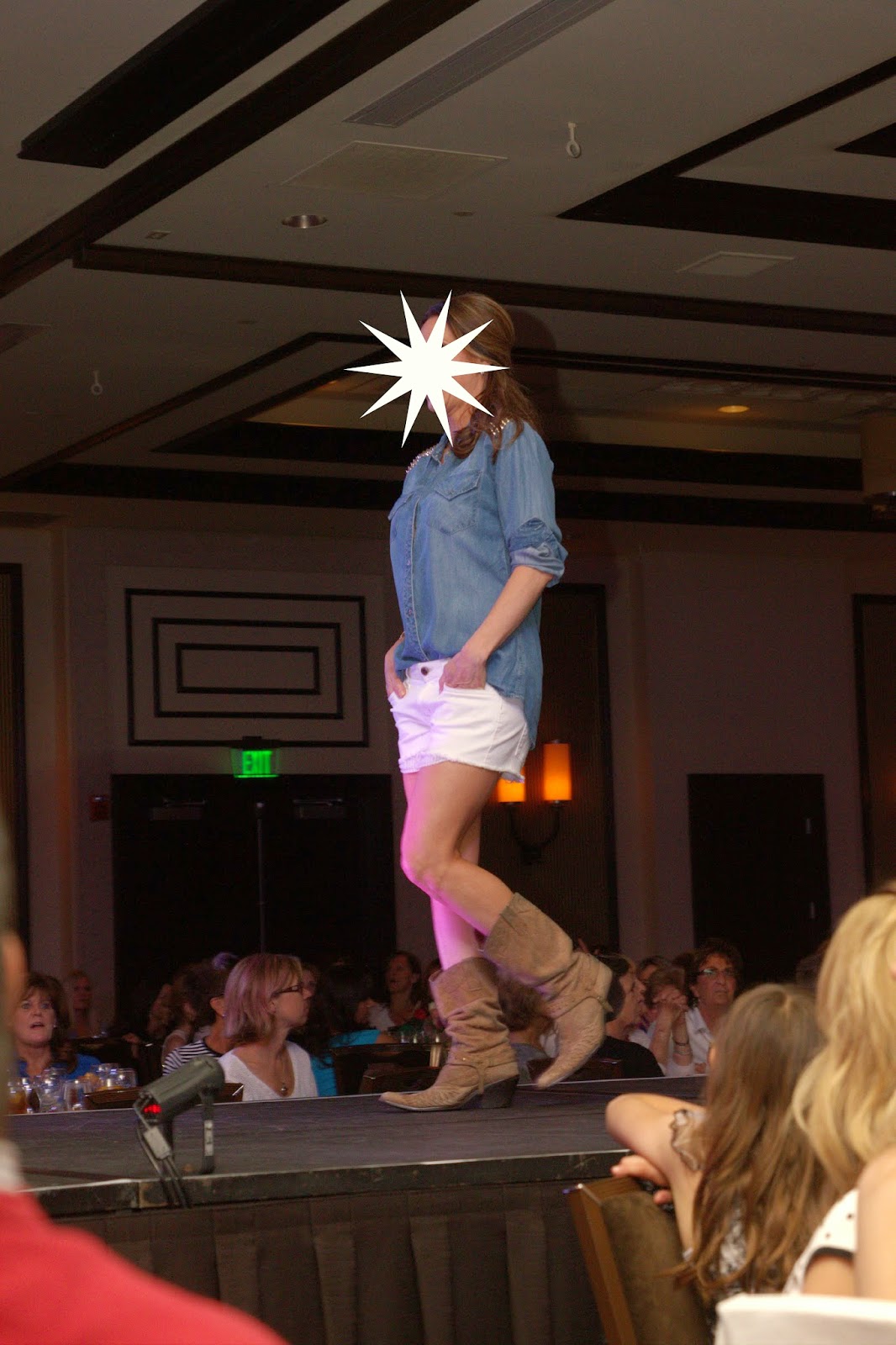 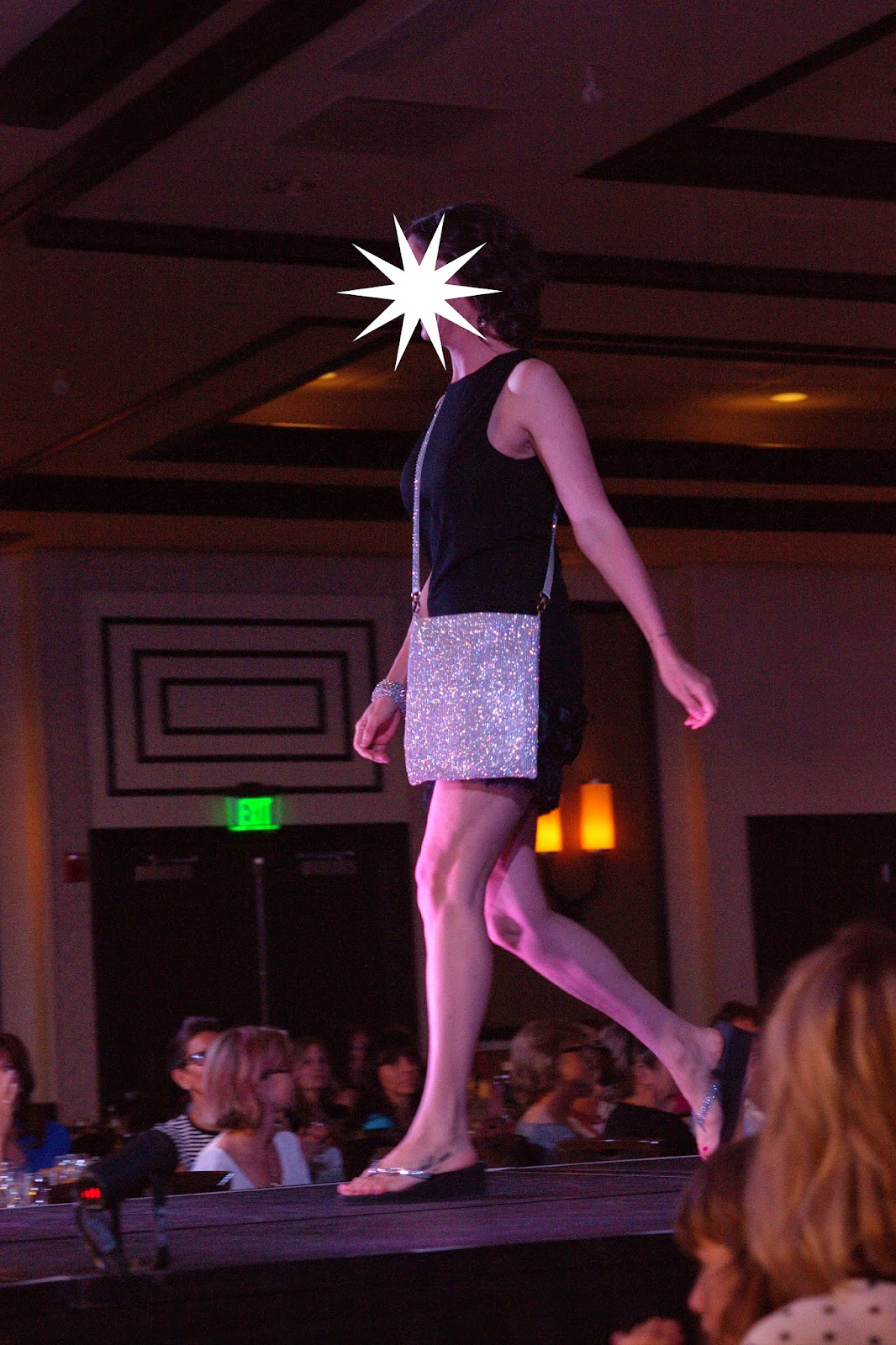 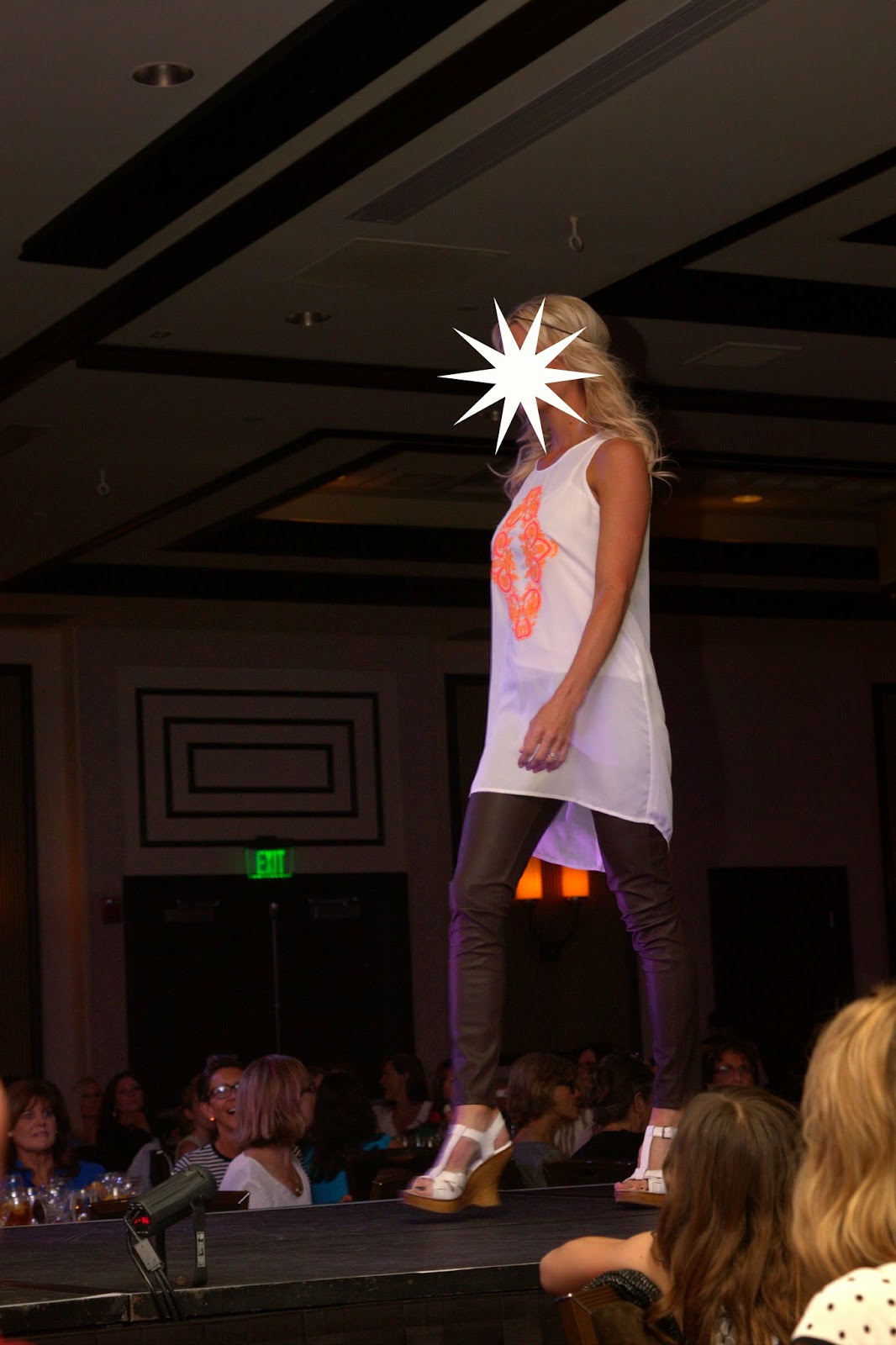 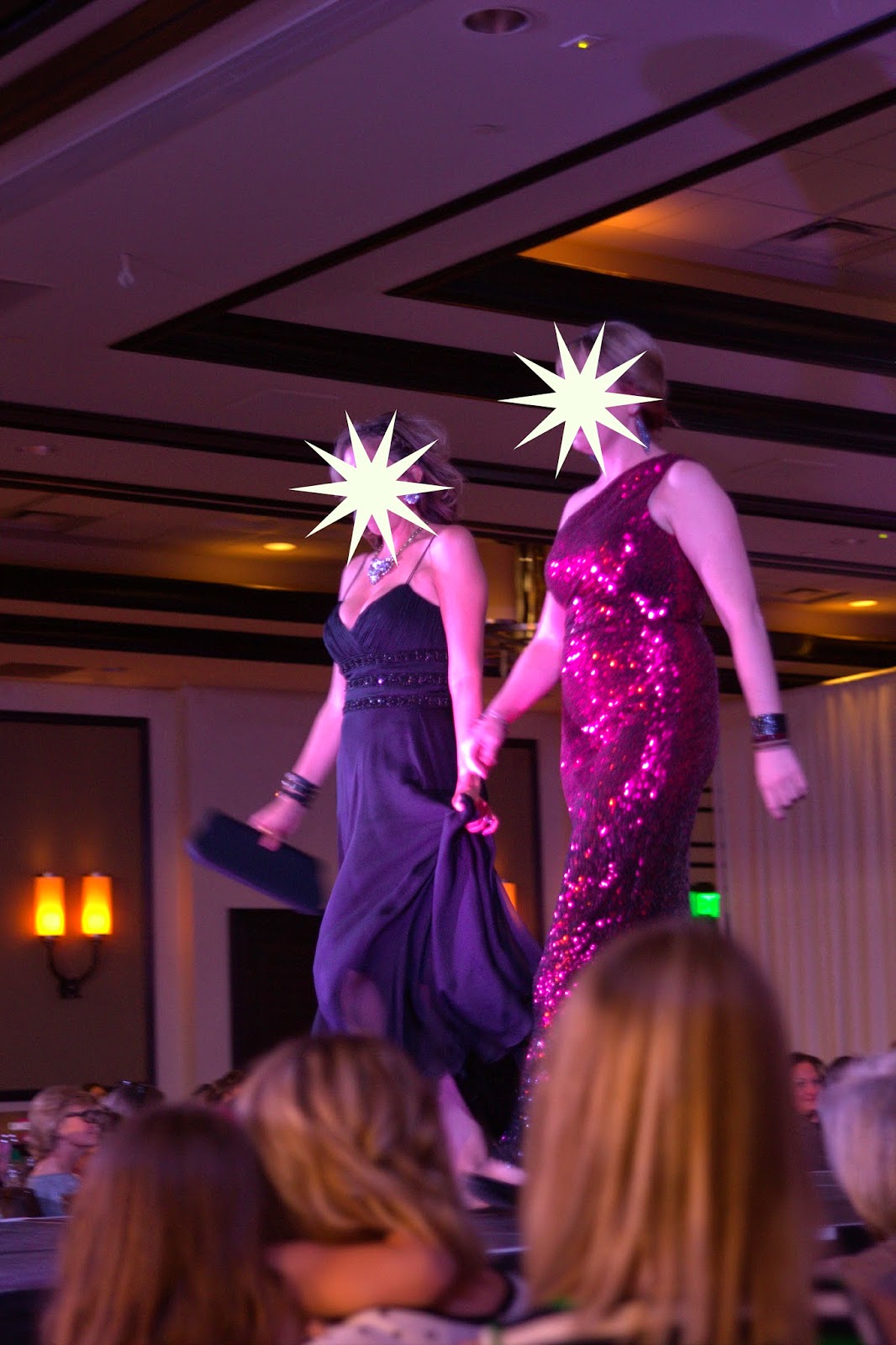 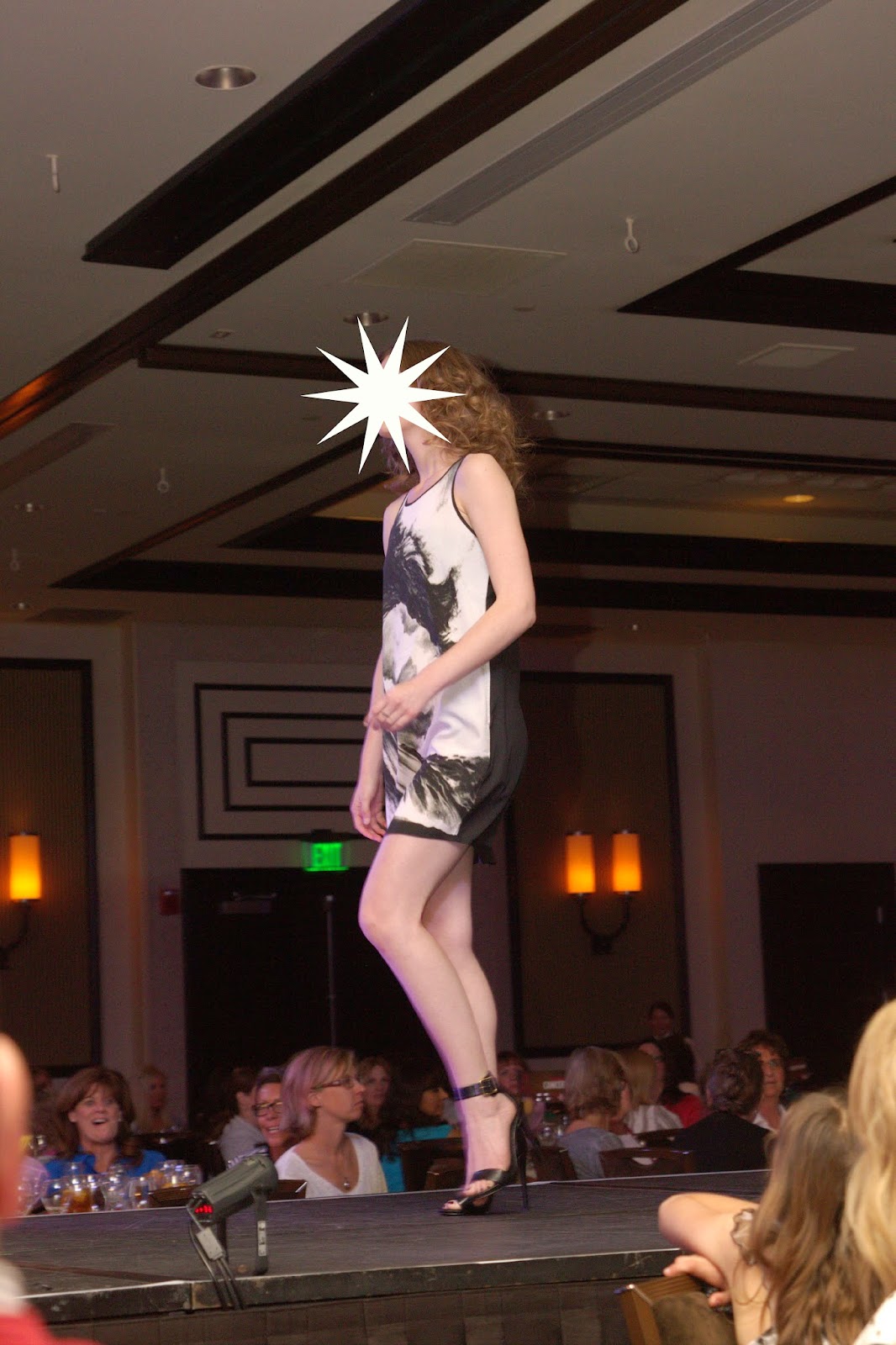 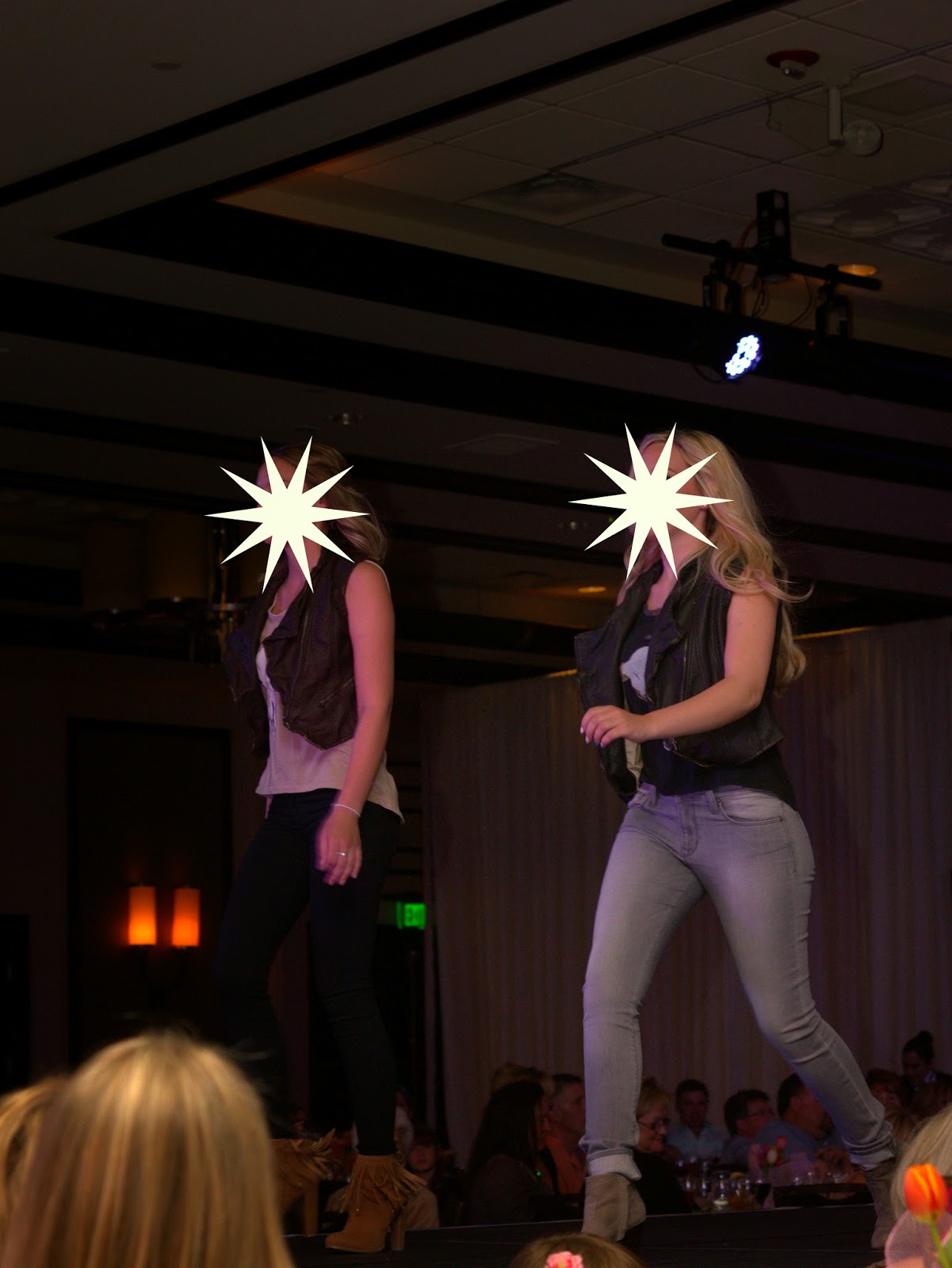 Thank you to the wonderful ladies at LoDo Loft for all their hard work and the invite to this wonderful event. Thank you all for following along with my breast cancer journey. Your support means more then you know.  See you tomorrow at the Anything Goes linky party.

Posted by Mindie Hilton at 8:42 AM